Do you wish to make living with your cat as harmonious an experience as possible? Then you should take an interest in cat behaviour. Only if you understand your feline friend’s behaviour will you be able to respond to its needs and avoid misunderstandings. Moreover, you’ll find it easier to recognise behaviour problems and be able to intervene in time. 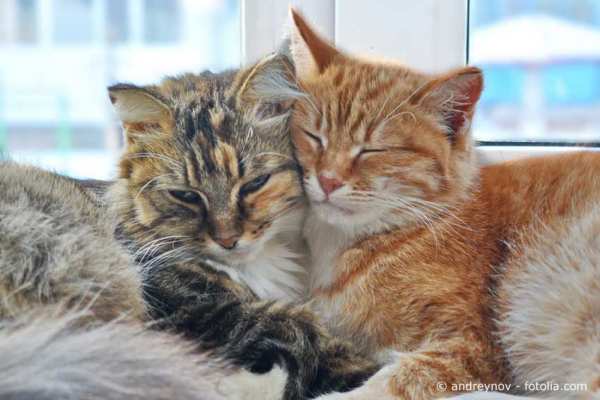 Cat behaviour as a means of communication

Cats have different ways of communicating. They use sounds, facial expressions, body language and behaviours to let us know whether they feel at ease, are scared or possibly stressed.

Purring is regarded as a sign of well-being. Newborn cats already show this behaviour when they suck at their mothers’ teats. By purring, they indicate to their mothers that they are well supplied with milk. The mother, on the other hand, purrs while nursing her kittens to reassure them.

A purring cat is likely to feel well. Usually cats purr when they are stroked, letting you know that they like it and want you to continue. But sometimes cats also purr when they don’t feel well. In this case, they are trying to reassure themselves.

Stretching and showing the belly

A cat’s belly is one of the most sensitive parts of its body apart from its neck. It is a sign of confidence if your cat lies down on its back in front of you and shows its stomach. You should interpret this cat behaviour as an invitation to stroke and tickle it.

A cat licking fellow cats shows natural cat behaviour. Licking is considered to be a sign of trust or love. If your cat licks you, you should regard it as something positive. Using its tongue, it finds out where you’ve been. Perhaps it likes the scent of your skin or the soap you use. Or it wants to remove a foreign scent from your body and cover it with its own. By licking your skin, your cat leaves very fine odour particles on you, marking you and staking its claim.

If your cat scratches your furniture, it doesn’t intend to annoy you. It’s rather a way of marking its territory. In the wild, cats sharpen their claws on trees, leaving scratching traces. They use scratching as a visual message to make clear: “I live here!”. Through glands on their paws they also secrete scents, which tell fellow cats that another cat has already been there. In some cases, cats try to impress other cats by scratching. Provide your cat with various scratching options in different locations in your flat. That way it can give expression to its natural behaviour and your furniture doesn’t need to suffer. For further tips on how to care for cats in an appropriate way, see Cat care – general tips to improve your cat’s well-being.

Flehming or the flehmen response are terms for a certain facial expression in cats: slightly open mouth, wrinkled nose and detached look. The flehmen reaction is a state in which cats perceive odours through the Jacobson’s organ, which can be found in the roof of the mouth. They receive odour information via the tongue and taste the smell, so to speak. The flehmen response is mainly seen in male cats, which pick up the sexual scents of female cats in heat.

When kneading, cats push back and forth with their front paws. Some cats extend and retract their claws during this motion and purr. Kneading is an innate instinct. Kittens knead the teats of their mothers to stimulate milk secretion, but kneading is also observed in adult cats. Whenever your feline companion kneads, it feels at ease and well.

Cats show natural behaviour when they rub their heads against persons or objects; this is a friendly form of marking. They lay down their scent through glands on their heads, sending out the message: “You belong to me”. Cats feel secure when the people and objects in their territory have their smell. This form of marking doesn’t pose any problem with indoor cats. Other forms, however, such as urine spraying, can put the coexistence between humans and cats to the test. Cats use this form to mark their territory with urine, something which is not unusual with unneutered cats. They leave their scents at prominent points in their territory. You can avoid urine marking by having your cat neutered before it becomes sexually mature.

Cats that avoid the litter box and use other places in the flat for urinating create an unpleasant situation for their cat owners. Inappropriate urination is a problem and can have different causes. We recommend that you investigate this cat behaviour because your cat may be ill, and possibly has a bladder infection.  If disease can be ruled out, then fear, stress, protest or dissatisfaction may be other reasons for this behaviour. The cat may have problems with the cat toilet or the litter you use. For possible explanations and suggested solutions, see our blog post blog post Inappropriate urination of cats.

If your cat goes outdoors, it will follow its hunting instinct, chasing mice and birds. And from time to time it will be successful in doing so. It’s natural behaviour for cats to play with their prey before killing it. Playing serves to determine whether the prey is in good health. If a mouse gets weak quickly, it may be ill and the cat may leave it. Usually, cats learn the fatal bite from their mothers. This is a targeted bite into the neck of the prey. If the cat hasn’t learned how to deliver it, it may play with the prey until it dies.

Cats which are successful at hunting sometimes give their prey to less successful fellow cats as a present. They want the other cats to have something delicious to eat too. So if your cat brings you its prey, think of it as a present. Half-dead prey is given to you for exercise, because your cat considers you to be a lousy hunter. Accept the prey before disposing of it discreetly.

COSYCAT was awarded top marks in a cat litter comparison and judged as the best product.

END_OF_DOCUMENT_TOKEN_TO_BE_REPLACED

Which cat litter is compostable?

More and more cat owners are thinking about the environment. With this in mind, they seek a cat litter that is eco-friendly and compostable. But which types of cat litter can be composted and what do you need to consider?

END_OF_DOCUMENT_TOKEN_TO_BE_REPLACED

A clean litter box is imperative for the well-being of your feline companion. Cats are particularly averse to unclean toilets. If they think the cat toilet isn’t clean enough, they may bypass it and do their business elsewhere in the home. To avoid this happening, you need to clean the litter box properly.

END_OF_DOCUMENT_TOKEN_TO_BE_REPLACED

The litter box is an important place for cats. If they don’t feel comfortable on the toilet, it can result in inappropriate urination. Here we list the various models to meet different requirements.

END_OF_DOCUMENT_TOKEN_TO_BE_REPLACED

Many cat lovers wish to contribute to a cleaner environment. Being ecologically sustainable, the COSYPET non-clumping wood pellet cat litter is a good choice.